I’m taking a much-needed spiritual retreat Thursday through Sunday. I’ll be back, much refreshed, next week. Until then: 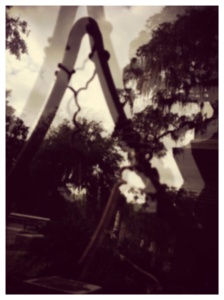 Because entering the kingdom is an individual act, only those who recognize the reality of the inner world and that the differentiation of personality is necessary can begin the journey.

John A. Sanford says that the wide road is the way through life that we travel unconsciously. It is the road of least resistance and mass identity. But, the narrow road (the wilderness road) requires our consciousness. We must pay close attention in order that we don’t wander off the path.

“The narrowness of the gate suggests the anxiety of this part of the process of finding the kingdom,” he says, “for narrowness and anxiety have long been associated.”

Our dreams often reflect this by showing us on a narrow way. For example, one may be traveling down a freeway and then turn off on a lesser known road. I recall having a dream in which I was trying to get to the airport but whatever road I turned onto became “narrower” as it presented some new obstacle to overcome.

Entrance into the kingdom, Sanford says, means the destruction of the old personality, with its constricted and uncreative attitudes.

“If this kingdom is to come,” he says, “this old person must die. The fortress behind which the ego has been hiding must be torn down.”

As Jesus said, “Anyone who loses his life for my sake will find it.” Matthew 10:39

The next paradox of entering the kingdom is that it is usually only those who have recognized that they have been injured or hurt in some way in life who are most apt to come into the kingdom, Sanford says.

“Only a person who has recognized his or her own need,” he says, “even despair, is ready for the kingdom.”

This paradox is expressed in the parable of the wedding feast in which everyone is too busy with their own lives to take part in this joyous event. Finally, it is those who seem least fit for the kingdom, who are forced to enter it.

“Those who are forced by life to concede to themselves that they are psychologically crippled, maimed or blind can be compelled to enter the great feast,” Sanford says.

Yet, if we arrive at the kingdom having neglected to recognize the divine author of the feast, we banish ourselves back to the realm of the unconscious.

“At some point in our inner development, there may come a desire on our part to stop the creative process.” Sanford says, “to decide, ‘This is enough; I need go no further.’ Often there then sets in a time of darkness and confusion worse than the first. Such an experience is a sure sign that the creative process of the kingdom will not be denied—that if one turns aside the demands of the creative, and seeks to return to a life of unconscious obedience, one’s fate will be worse than that of Sodom and Gomorrah.”

Like new wine in old wineskins, the creative contents of the kingdom require a new and fresh consciousness to hold them. Too many people have tried to hold on to the old personality and find themselves disintegrating under the impact of the kingdom. For the kingdom is the “new wine,” and the new wine of consciousness requires a new wineskin to hold it.

It is during this process, more than any other time that faith is essential. When the ego is thrust into the turbulent life of the unconscious, we must commit ourselves to the inner way regardless of what comes. We must be determined to know the One who is at the center of the conflict.

“It is in this sense that the story of the calming of the storm is to be understood (Luke 8:22-25),” Sanford says.

Jesus tells his disciples, “Let us cross over to the other side of the lake.”

And thus begins the journey: crossing over the waters of the unconscious to another stage of the journey. And, as often happens, there is a terrible storm. The disciples fear that they are going to drown.

“This is the deepest fear of the ego,” Sanford says, “that it will drown in the unconscious, be overcome and extinguished.”

At this point, many abandon the journey, but it is only faith that can give us the strength to persevere through the difficulties of the storm.

“Who can this be,” the disciples ask, “that gives orders even to the winds and waves and they obey him?”

Sanford says the ego standpoint is often represented as a house. If one puts one’s faith in things other than the consciousness of the meaning of God’s Word in the soul, the house of the ego cannot stand.

Jesus often uses the image of a house in his sayings.  The same image is important in our dreams, as well. The house represents our conscious framework and the images around the house can be used as a metaphor for an outside experience. Dreaming of a house with no windows or doors, for example, may mean that there is a condition of your consciousness that does not have any outlook on life and keeps you shut in.

So, when Jesus says, “Everyone who listens to these words of mine and acts on them will be like a sensible man who built his house on a rock. Rain came down, floods rose, gales blew and hurled themselves against that house, and it did not fall: it was founded on rock.” Matthew 7:24/Luke 6:47-48

This rock is the rock of consciousness. It is spiritual consciousness and insight that form the rock of Christ on which the kingdom is founded. If we build our house on this rock, we will be able to weather the often violent entrance to the kingdom.

Next Week: The Price of Discipleship

What lies within our depths?

I am reading a fascinating book by John A. Sanford, an Episcopal priest and Jungian analyst, called The Kingdom Within: The Inner Meaning of Jesus’ Sayings.

In it, he posits that we discover the Kingdom of Heaven within ourselves only once we become our authentic selves. As this fits in so well with the series I did on Shadow Work, I thought I would write a bit about it.

Jesus says: “The kingdom of heaven is like a treasure hidden in a field which someone has found; he hides it again, goes off happy, sells everything he owns and buys the field.” Matthew 13:44

Sanford says, “There is an inner reality within each of us that is like a great treasure lying hidden in the field of our soul waiting to be discovered. Someone who finds this inner treasure, and recognizes its value, will happily give up all other goals and ambitions in order to make it real in his or her life.”

He then compares the first parable to this one:

“Again, the kingdom of heaven is like a merchant looking for fine pearls; when he finds one of great value he goes and sells everything he owns and buys it.” Matthew 13:45-46

While at first glance, the parables seem similar, when looked at more closely one sees that in the first parable the kingdom is a treasure that we search for and find; and in the second, it is we who are the pearls of great price, the merchant being God.

Throughout the history of Christianity, and despite the fact that there is none of this to be found in the teachings of Jesus, we have dwelt on the unworthiness of humans in contrast to God’s goodness. We have emphasized original sin rather than original innocence.

Matthew, Mark and Luke all mention the parable of the mustard seed, in which the kingdom of heaven is likened to the smallest of seeds that grows into a tree large enough to shelter the birds.

“So,” continues Sanford, “the kingdom of heaven begins in a person’s life as something seemingly small and insignificant but through a process of growth becomes a mighty power.”

While many remain ignorant of the potential for inner growth, it is through acceptance of the inner power for growth that our lives reach fulfillment. Our dreams, Sanford says, often reflect this potential with images of trees or children.

“Except a man be born again, he cannot see the kingdom of God.” John 3:3, KJV

“This certainly implies that the kingdom is a present reality to be entered into by the individual when he or she achieves such radical transformation of character that it is represented under the image of rebirth,” Sanford says.

That means that for the individual today, the kingdom can be reached through the process of inner growth into wholeness and creativity.

Unfortunately, many translations have chosen to use “among” in preference to “within.”  This is likely because, Sanford claims, we live in an extremely extraverted time in which we have traded the inner life of spiritual growth for outward actions. Although, he says, the ambiguity of the Greek preposition entos is probably deliberate because there is a sense in which the kingdom of heaven is both within ourselves and outside ourselves and among us and other people.

“You must therefore be perfect just as your heavenly Father is perfect.” Matthew 5:48

Impossible, we say. How are we to achieve that perfection?

Another poor translation as the original Greek meant “brought to completion” or “brought to the end state.”

“If we understand the word in this way,” Sanford says, “we see that Jesus is urging us to be brought to the end state for which we were created and that is brought about through the unfolding of the inner Self.”

This means that God can be as personal to us as our own inner creative process. The kingdom is both highly personal yet potentially open to all, regardless of race, creed, sex or social status.

That is, the Laws (Commandments) would not be necessary if there were not parts of our personality that might commit things like murder, adultery, stealing, coveting, etc.

“The higher morality requires confronting the shadowy one within us who has made the rules necessary in the first place,” he says. “In this way we achieve a truly differentiated moral attitude toward ourselves and life and are fit for the creative life of the kingdom.”

So, once again, we have been given a reminder of the extreme importance of Shadow Work and self-knowledge.

Next Week: Entering into The Kingdom