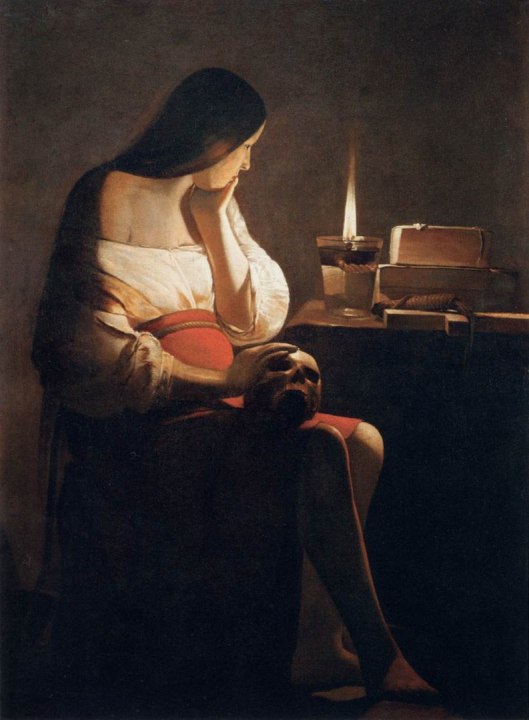 Magdalen with the Smoking Flame by Georges de La Tour

Tomorrow is the feast day of Saint Mary Magdalen. She is someone I have always been in awe of having grown up under the shadow of this painting by La Tour, which always held a place of honor in our home (at least, it always stood out to me). It wasn’t just the skull as much as the way she is gazing into the flickering light of the oil lamp and the way her hair shimmers in the light.

In the Episcopal Church, we mark this day in our Calendar of Saints with the following Collect:

Almighty God, whose blessed Son restored Mary Magdalene
to health of body and mind, and called her to be a witness of
his resurrection: Mercifully grant that by thy grace we may
be healed of all our infirmities and know thee in the power of
his endless life; who with thee and the Holy Spirit liveth and
reigneth, one God, now and for ever. Amen.

11 But Mary stood weeping outside the tomb. As she wept, she bent over to look into the tomb; 12 and she saw two angels in white, sitting where the body of Jesus had been lying, one at the head and the other at the feet. 13 They said to her, “Woman, why are you weeping?” She said to them, “They have taken away my Lord, and I do not know where they have laid him.” 14 When she had said this, she turned around and saw Jesus standing there, but she did not know that it was Jesus. 15 Jesus said to her, “Woman, why are you weeping? Whom are you looking for?” Supposing him to be the gardener, she said to him, “Sir, if you have carried him away, tell me where you have laid him, and I will take him away.” 16 Jesus said to her, “Mary!” She turned and said to him in Hebrew,“Rabbouni!” (which means Teacher). 17 Jesus said to her, “Do not hold on to me, because I have not yet ascended to the Father. But go to my brothers and say to them, ‘I am ascending to my Father and your Father, to my God and your God.’” 18 Mary Magdalene went and announced to the disciples, “I have seen the Lord”; and she told them that he had said these things to her. (New Revised Standard Version)

And from the Gospel According to Mary Magdalene:

1) But they were grieved. They wept greatly, saying, How shall we go to the Gentiles and preach the gospel of the Kingdom of the Son of Man? If they did not spare Him, how will they spare us?

2) Then Mary stood up, greeted them all, and said to her brethren, Do not weep and do not grieve nor be irresolute, for His grace will be entirely with you and will protect you.

3) But rather, let us praise His greatness, for He has prepared us and made us into Men.

4) When Mary said this, she turned their hearts to the Good, and they began to discuss the words of the Savior.

5) Peter said to Mary, Sister we know that the Savior loved you more than the rest of woman.

6) Tell us the words of the Savior which you remember which you know, but we do not, nor have we heard them.

7) Mary answered and said, What is hidden from you I will proclaim to you. 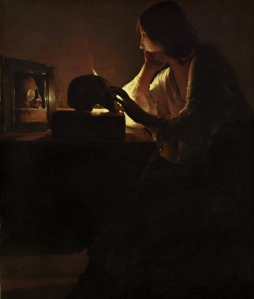 . . . Will matter then be utterly destroyed or not?” The Savior replied, “Every nature, every modeled form, every creature, exists in and with each other. They will dissolve again into their own proper root. For the nature of matter is dissolved into what belongs to its nature.

~~The Gospel of Mary Magdalene