It is October in Wisconsin and Aldo Leopold turns to the subject of the fall hunt. I have to admit that I have only been hunting once in my life and that was because I was doing a story for a daily newspaper on a hunting club.

They tried to fool this Girl Scout into thinking that golden raisins were deer scat, but I knew better. Once they realized I (my husband who was photographing the story had hunting experience) wasn’t a nature novice, I was treated with more respect and had a wonderful time. And I never told them that I was secretly pleased that no deer died by our hands that weekend.

But in A Sand County Almanac, Leopold reminisces about hunting for grouse and pheasants:

“There are two kinds of hunting:” he begins, “ordinary hunting and ruffed-grouse hunting.

“There are two place to hunt grouse: ordinary places, and Adams County.

“There are two times to hunt in Adams: ordinary times, and when the tamaracks are smoky gold.” 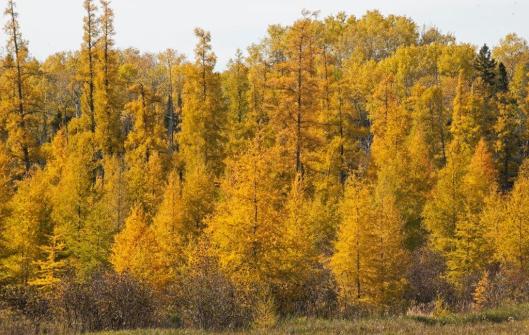 “The tamaracks change from green to yellow when the first frosts have brought woodcock, fox sparrows, and juncos out of the north,” he writes. “Troops of robins are stripping the last white berries from the dogwood thickets, leaving the empty stems as a pink haze against the hill. The creekside alders have shed their leaves, exposing here and there an eyeful of holly. Brambles are aglow, lighting your footsteps grouseward.”

Musing on an abandoned farm that he passes, Leopold becomes aware that his dog has  been “pointing patiently these many minutes.”

“I walk up,” he writes, “apologizing for my inattention. Up twitters a woodcock, batlike, his salmon breast soaked in October sun. Thus goes the hunt.”

Leopold then reflects on early risers, what he says is a “habitual vice in horned owls, stars, geese, and freight trains.” 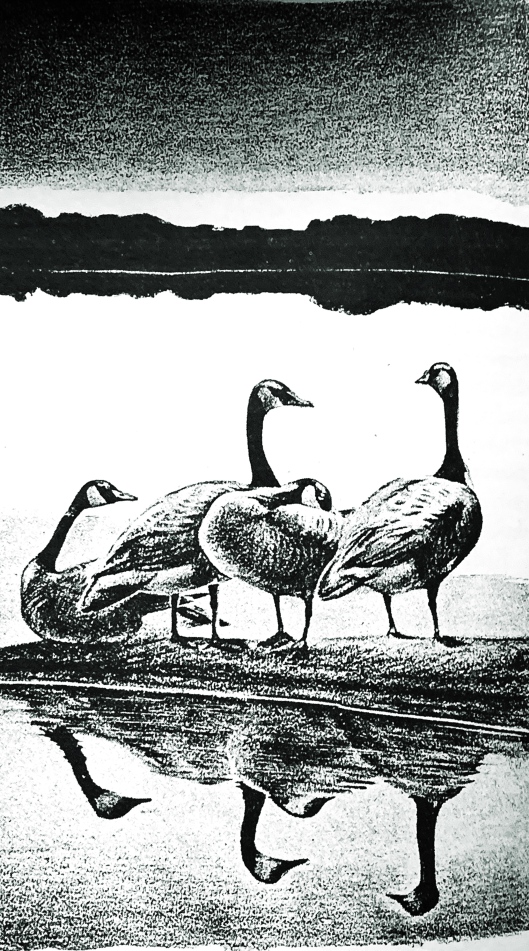 “Some hunters acquire it from geese,” he continues, “and some coffee pots from hunters. It is strange that of all the multitude of creatures who must rise in the morning at some time, only these few should have discovered the most pleasant and least useful time for doing it.”

“Early risers,” he writes later, “feel at ease with each other, perhaps because, unlike those who sleep late, they are given to understatement of their own achievements. Orion [the constellation], the most widely traveled, says literally nothing. The coffee pot, from its first soft gurgle, underclaims the virtues of what simmers within. The owl, in his trisyllabic commentary, plays down the story of the night’s murders. The goose on the bar, rising briefly to a point of order in some inaudible anserine debate, lets fall no hint that he speaks with the authority of all the far hills and the sea.

“The freight, I admit, is hardly reticent about his own importance, yet even he has a kind of modesty: his eye is single to his own noisy business, and he never comes roaring into somebody else’s camp. I feel a deep security in this single-mindedness of freight trains.”

“One way to hunt partridge,” Leopold notes, “is to make a plan, based on logic and probabilities, of the terrain to be hunted. This will take you over ground where the birds ought to be.

“Another way is to wander, quite aimlessly, from one red lantern to another. This will likely take you where the birds actually are. The lanterns are blackberry leaves, red in October sun.”

Guess which is Leopold’s preferred method.

“Red lanterns,” he continues, “have lighted my way on many a pleasant hunt in many a region, but I think that blackberries must first have learned how to glow in the sand counties of central Wisconsin.”

“At sunset on the last day of the grouse season,” Leopold concludes, “every blackberry blows out his light. I do not understand how a mere bush can thus be infallibly informed about the Wisconsin statutes, nor have I ever gone back the next day to find out. For the ensuing eleven months the lanterns glow only in recollection. I sometimes think that the other months were constituted mainly as a fitting interlude between Octobers, and I suspect that dogs, and perhaps grouse, share the same view.”