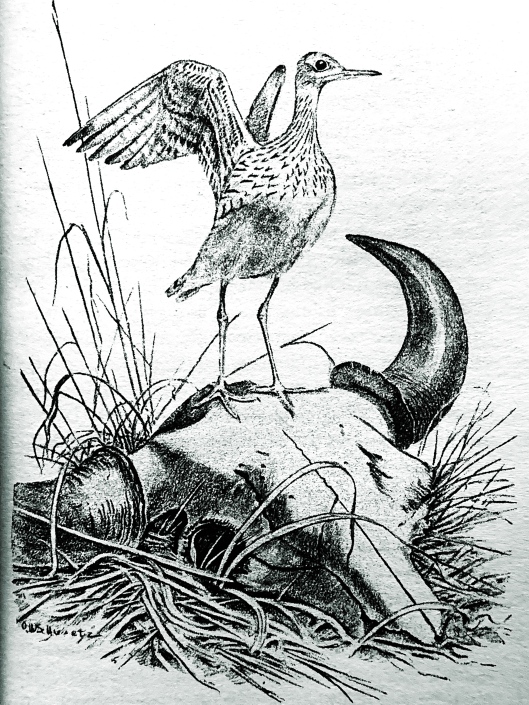 It’s May in Wisconsin and clearly Aldo Leopold has a great love of birds, as this month he chronicles the return of the plovers from “the Argentine”:

“When dandelions have set the mark of May on Wisconsin pastures,” he writes, “it is time to listen for the final proof of spring. Sit down on a tussock, cock your ears at the sky, dial out the bedlam of meadowlarks and redwings, and soon you may hear it: the flight-song of the upland plover, just now back from the Argentine.”

Once the plover has landed, it surveys its domain:

“There he sits;” Leopold writes, “his whole being says it’s your next move to absent yourself from his domain. The county records allege that you own this pasture, but the plover airily rules out suck trivial legalities. He has just flown 4000 miles to reassert the title he got from the Indians, and young plovers are a-wing, this pasture is his, and none may trespass without his protest.”

By August, Leopold says, the young plovers will have graduated from flight school and the birds will wing their way, once again, toward the pampas.

“Hemisphere solidarity is new among statesmen, but not among the feathered navies of the sky,” he writes.

Leopold ends by saying: “In farm country, the plover only has two real enemies: the gully and the drainage ditch. Perhaps we shall one day find that these are our enemies, too.

“There was a time in the early 1900’s when Wisconsin farms nearly lost their immemorial timepiece, when May pastures greened in silence, and August nights brought no whistled reminder of impending fall. Universal gunpowder, plus the lure of plover-on-toast for post-Victorian banquets, had taken their toll. The belated protection of the federal migratory bird laws came just in time.”

The plover, fortunately, was luckier than the carrier pigeon, for example. And since 1963, we’ve managed to eliminate nearly 40 more species of birds, fish, amphibians, molluscs, plants, mammals, and insects in North America alone.

That number will continue to grow as our population continues to expand. According to population estimates recently released by the U.S. Census Bureau, more than 328 million people rang in the new year in the United States. This is an increase of more than 2 million people from the previous year.

The growth was concentrated in western and southern states, where communities and wildlife have felt increasing pressure from drought, severe weather, threats to public land and unsustainable development, according to the Center for Biological Diversity.

“Wildlife and wild places face pressures from a rapidly growing population as politicians and corporations gun to open public lands in high-growth areas to toxic mining, drilling and fracking,” said Kelley Dennings, a population campaigner at the Center for Biological Diversity. “Runaway growth and development will harm irreplaceable natural and cultural treasures and our incredible biodiversity.”

Red wolves and Florida panthers in the south, Mount Graham red squirrels in Arizona, and Humboldt martens in California are just some of the species that are facing extinction.

When are we going to start taking seriously the loss of all these creatures?