A red eye tree frog perches atop a bird of paradise.

Frank and I spent the past several weeks in Central America. The first two weeks were spent in Heredia, Costa Rica, where we attended the Tico Lingo language school and immersed ourselves in español for two weeks and six to eight hours a day.

We took advantage of the one weekend we had to tour the La Paz Waterfall Gardens where I met the tree frog. I also had the luck of seeing several butterflies emerging from their chrysalises: 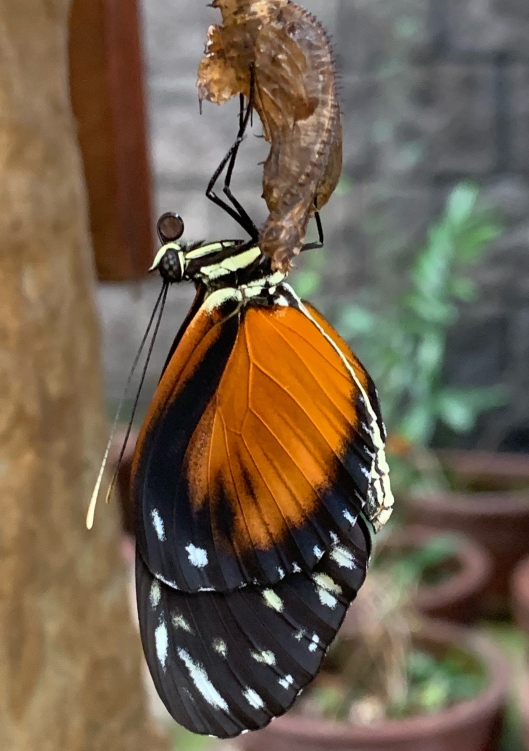 Because we were there during the rainy season, most of the day was spent in the rain. The advantage to that is that it made the fern-like trees of the rainforest seem otherworldly and almost primeval:

Our first week of Spanish class was in an outdoor classroom. Fortunately, Heredia is at a high enough elevation (3,770 feet/1,150 meters) that the temperatures range from a low of 58º Fahrenheit/14.4º Celsius to a high of 80º Fahrenheit/26.6º Celsius the entire year. There’s no need for air conditioning or heating! Just make sure you bring an umbrella, particularly if you are going to be there between May and October.

Next week: A change in elevation and climate as we head to Panama.