Illustration for A Sand County Almanac by Charles W. Schwartz

Aldo Leopold begins his chapter on February this way:

“There are two spiritual dangers in not owning a farm. One is the danger of supposing that breakfast comes from the grocery, and the other that heat comes from the furnace.”

He continues, “To avoid the first danger, one should plant a garden, preferably where there is no grocer to confuse the issue.

“To avoid the second, he should lay a split of good oak on the andirons, preferably where there is no furnace, and let it warm his shins while a February blizzard tosses the trees outside. If one has cut, split, hauled, and piled his own good oak, and let his mind work the while, he will remember much about where the heat comes from, and with a wealth of detail denied to those who spend the week end in town astride a radiator.”

I was fortunate enough to have lived on a very small-scale farm during a few of my teenage years. Although we had a garden, our cows (and at one point, pigs) accounted for more of our diet than vegetables. Having helped slaughter, clean, and grind meat, I am now always keenly aware from whence my meat comes (which is one reason I am attempting to eat less of it).

The house we lived in at the time (Briarpatch) was heated by wood stoves. That meant a large portion of the year, after school and on weekends, was dedicated to cutting and hauling wood to be later burned in those stoves. It was never easy but it was particularly difficult when it was cold and my numbed fingers could barely feel the logs I was hoisting into my arms.

Following college, I was once again reminded about heat when my husband and I spent a winter either crouched before the fire place or locked in a room with a space heater when the gas company refused to turn on our heater because they didn’t want to be responsible for a possible leak. Although we were both employed by a daily newspaper, we were still too poor to have the heater fixed and had to suffer through a colder than normal mid-Georgia winter, in which the temperatures plummeted more than 6º below 0º Fahrenheit.

A view from a February morning walk around Daffin Park.

In A Sand County Almanac, Leopold takes us back in time as he discusses the history of the oak that is burning in his fire place. When the tree was cut, he calculated that it was a seedling about 1865, at the end of the Civil War. But, he writes, the acorn that produced it most likely fell during the preceding decade “when covered wagons were still passing over my road into the Great Northwest.”

A bolt of lightning put an end to the 80-year-old tree during a July thunderstorm. Leopold and his family let the wood season for a year “in the sun it could no longer use” and eventually felled it on a crisp winter’s day.

“Fragrant little chips of history spewed from the saw cut,” he wrote, noting that the saw was carving its way “into the chronology of a lifetime, written in concentric annual rings of good oak.”

The from the reign of the bootlegger who had previously owned his farm in the 1930s, forced out by the Dustbowl droughts of that era, Leopold takes us back to the 1920s. From 1929 when the stock markets crumpled to 1925 when Wisconsin saw the demise of the last marten to 1922 and the “Big Sleet” of March, that tore the limbs from the surrounding elms.

Further back, from 1910 to 1920, the oak continued to grow despite even as the Supreme Court abolished state forests in 1915. In 1910, “a great university president published a book on conservation (Charles Van Hise, University of Wisconsin-Madison), and then 4 years earlier (1906) when the first state forester took office not knowing state forests would be abolished not even a decade later. That same year, fires burned 17,000 acres of the sand counties.

The ring from 1899 was mute about the last passenger pigeon, which had “collided with a charge of shot near Babcock”, two counties to the north of Leopold. 1893 saw the year of “The Bluebird Storm” when a March blizzard killed nearly all of the migrating bluebirds.

Then further back–1890–and the year of the Babcock Milk Tester and why Wisconsin is known as “America’s Dairyland” today. The previous year, a drought year in Wisconsin, was the year Arbor Day was first proclaimed. At the beginning of that decade, in 1881, the Wisconsin Agricultural Society debated the question: How do you account for the second growth of black oak timber that has sprung up all over the county in the last thirty years?

“My oak was one of these,” Leopold writes.

The decade of the 1870’s saw Wisconsin’s “carousal in wheat”. By the end of the decade, farmers realized that they had lost the game of “wheating the land to death.”

“I suspect that this farm played its share in the game,” Leopold writes, “and that the sand blow just north of my oak had its origin in over-wheating.”

1874 saw the arrival of the now ubiquitous factory-made barbed wire. Finally the rings have reached the center of the tree:

“Our saw now cuts the 1860’s,” writes Leopold, “when thousands died to settle the question: Is the man-man community lightly to be dismembered? They settled it, but they did not see, nor do we yet see, that the same question applies to the man-land community.”

The pith of the oak, 1865, is the year that John Muir offered to buy the home farm from his brother. Thirty miles east of Leopold’s oak, this land was a sanctuary for the wild flowers that had gladdened Muir’s youth. While his brother refused to sell the farm John, the dream remained, and as Leopold notes, “1865 still stands in Wisconsin history as the birthyear of mercy for things natural, wild, and free.” 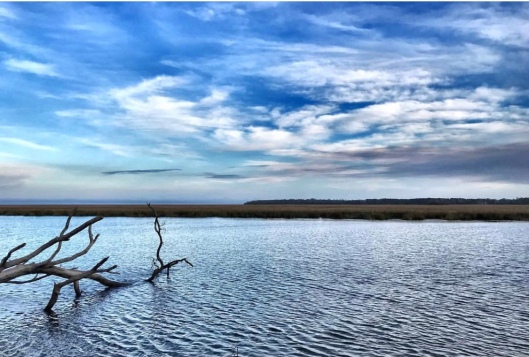 A February day at Honey Creek on the Georgia salt marshes.