What it took for me to create a 3-book fantasy saga.

It is finished. What began with the idea of one character in college (more than thirty years ago) and progressed to the concept of a Princess discovering the world beyond her father’s kingdom about ten years later, before morphing into the concept of a Divinely-inspired Quest to gather together the Thirteen Hallowed Treasures, has finally come to an end.

From The Path to Misery to In Lonely Exile to the final book in the saga, Death’s Dark Shadows, it needed more than 380,000 words to tell the tale.

The photo above shows what it took (for me) to accomplish writing a fantasy set in a post, post apocalyptic world over the course of more than three years of travel set within Thirteen Kingdoms.

Dozens of notecards detailing characters, food, lodgings, details about each of the Kingdoms and the Treasures, among other things, were absolutely essential. I also made calendars to keep track of where the characters were and how long it took them to reach their destinations.

In Death’s Dark Shadows, I was able to maintain continuity by checking facts against the books that had already been published. I even went so far as to make notes and drawings in Eluned’s leather-bound journal.

Hopefully, Death’s Dark Shadows will see publication in the late spring (it’s still in edits). And now I will turn my attention to the possibilities of what I will write next: Romantic Suspense? Historical Romance? Or a series of books for 7- to 12-year-olds? 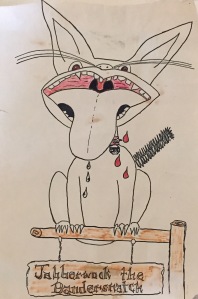 The drawing that inspired the character, Jabberwock, which I sketched while bored in Geology Lab.