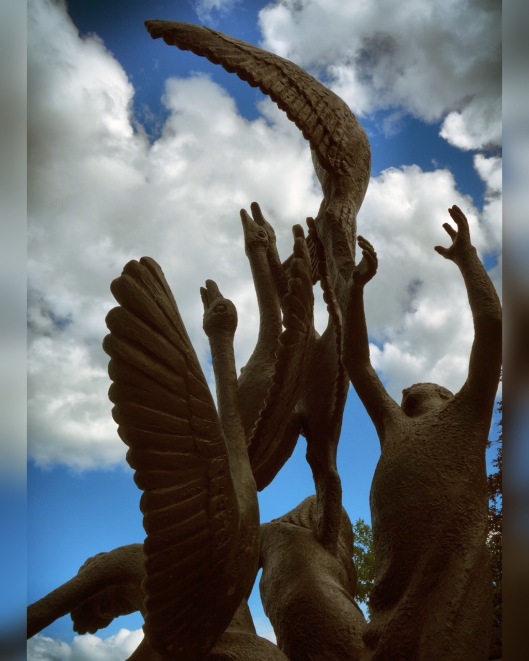 The statue in the Garden of Remembrance in Dublin.

I’ve added some more photos to my website of some of the details from our trip around Ireland. You can find them here: Ireland 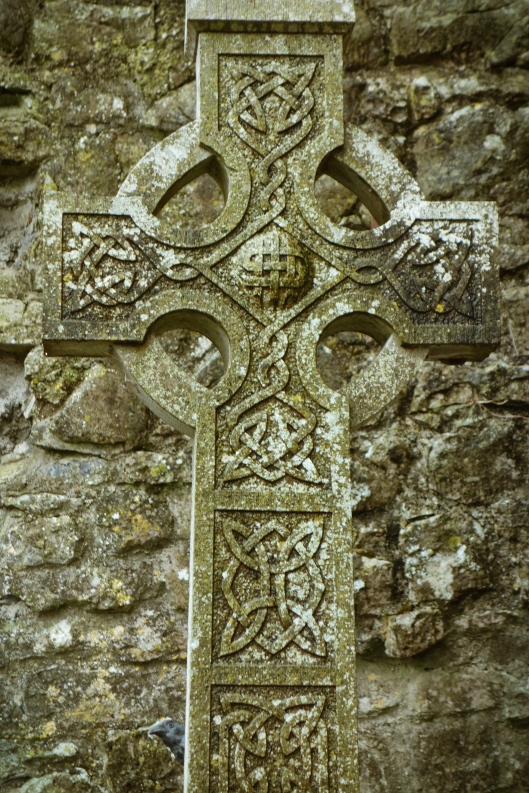 A Celtic cross against a stone wall in the graveyard of the abbey ruins in Galway, County Clare. 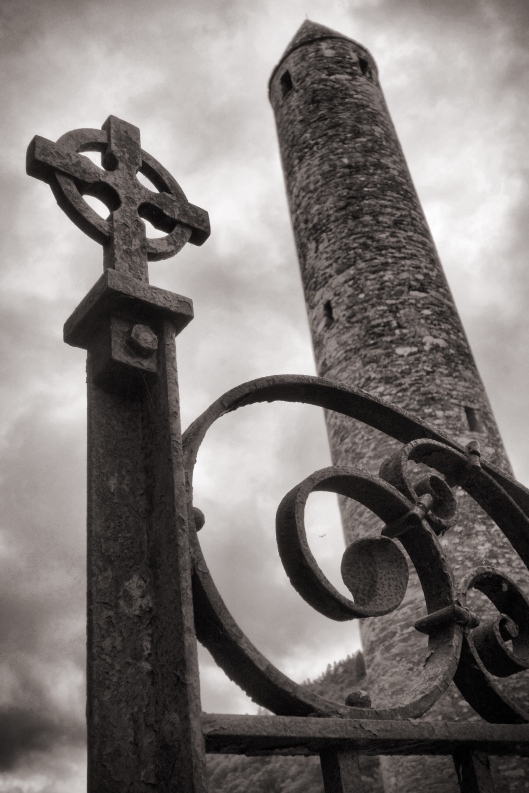 The round tower and graveyard gate at Glendalough, County Wicklow. 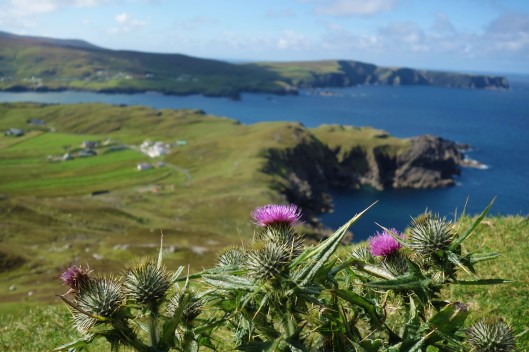 Thistles and a view of Glencolmcille in County Donegal from the Tower Loop Hike.

You cannot miss them when traveling to Ireland. We recently spent a week in a cottage in Glencolmcille, County Donegal, before driving down the western coast to stop in Ennistymon, Dingle and Killarney. We then drove across the Republic to Glendalough before spending our final two days in Dublin. This week’s focus is the Irish Landscape. Next week, I’ll look at some of the details.

To see another dozen photos, visit my website here: Ireland 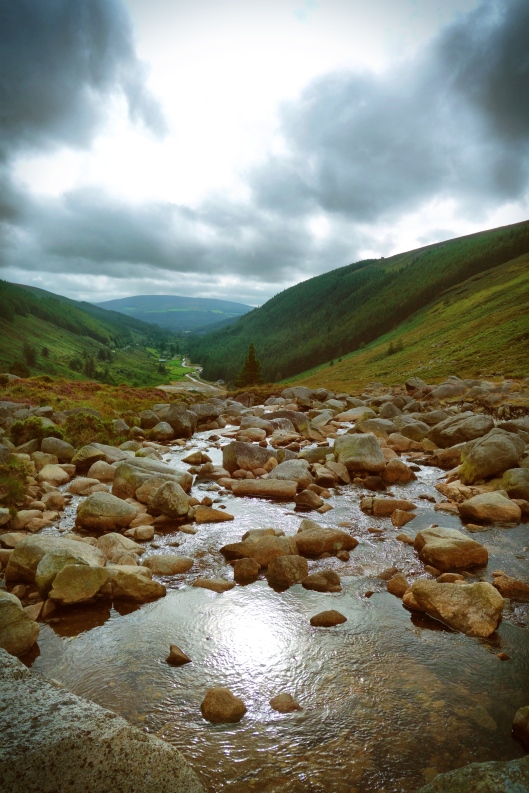 A view down the valley toward Glendalough in the Wicklow Mountains, County Wicklow. 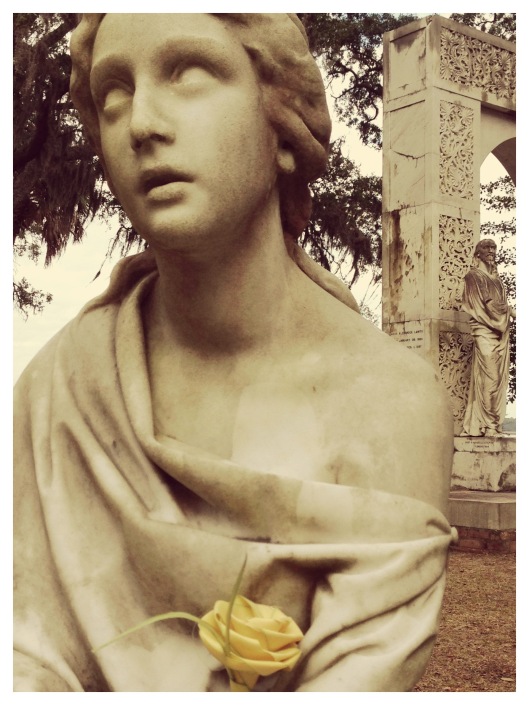 Escape me?
Never—
Beloved!
While I am I, and you are you,
So long as the world contains us both,
Me the loving and you the loth,
While the one eludes, must the other pursue.
My life is a fault at last, I fear:
It seems too much like a fate, indeed!
Though I do my best I shall scarce succeed.
But what if I fail of my purpose here?
It is but to keep the nerves at strain,
To dry one’s eyes and laugh at a fall,
And baffled, get up to begin again,—
So the chase takes up one’s life, that’s all.
While, look but once from your farthest bound,
At me so deep in the dust and dark,
No sooner the old hope drops to ground
Than a new one, straight to the selfsame mark,
I shape me—
Ever
Removed! 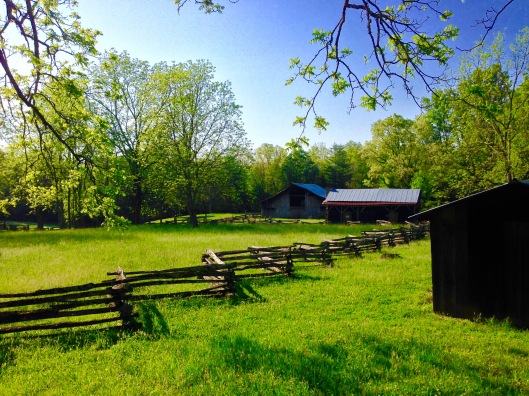 True Confessions and True Love may have been my first nationally published fiction, but Boomerang was my first published fiction. In 1983, it won second place in the short story contest for the Miscellany, Georgia Southern University’s annual Literary and Art Magazine.

It took a lot of willpower as I was retyping it to neither edit nor work to improve it. Here it is in all its very short glory. Hopefully, my writing has improved in the past 33 years:

He stood, his back against a fence post, breathing deeply of the pine-scented air. His copper hair glinted in the sunlight, and his emerald green eyes sparkled. He looked over his shoulder at the newly furrowed fields, the upturned earth tumbled red in the sun. Breathing a sigh of satisfaction he waved to his tenant farmer, and his countenance revealed how absolutely happy he was.

His wife stepped outside with their toddler son. Her bright blue eyes smiled at his antics with the puppy. She looked into her husband’s eyes, and the love that shone between them was almost tangible.

“Dinner will be ready soon,” she said.

“Great,” he smiled. “I’m starving.” She called their son, and they reentered the house.

Still leaning against the fence post, he reflected happily on his life.

He had one child that he adored, a son who had bright copper hair and laughing blue eyes. Another child was on the way, and he was certain it would be a daughter with his emerald green eyes and his wife’s blond curls. He had a well-paying, steady job, and the house they lived in was built from their ideas and needs. A dream house. He loved his wife more than any earthly thing, and he counted his father-in-law as one of his best friends.

A disconcerting thought crossed his mind as he turned to latch the gate.

“No one can be this lucky.”

But he quickly rejected it, arguing that he had worked hard for what he had and deserved to be happy.

He latched the gate and turned to walk toward the house, unaware that a rifle was aimed directly at his heart.

The glazed emerald green eyes of the copper-haired man stared into the clear blue sky, not seeing the few white clouds that drifted across it nor the gloating face, which looked down into his own. The shot had been clean; the man had died instantly.

He looked gleefully down at his man, and brown eyes sparkled blissfully as he brought his catch home.

He trotted into the house calling happily for his wife. She was very petite with huge eyes of a deep chestnut brown. She could tell by the look on his face that his hunting trip had been successful. She groaned, inwardly, at the thought of putting more meat into the freezer. This would mean that they would be dining on human frequently in the upcoming weeks. She just hoped that this one would not be as tough as the last.

“I shot one with copper-colored hair and emerald green eyes!” he exclaimed excitedly. “You know how rare those are. We’re going to have to take down the blond head over the mantle so we can put this one up.”

“Good,” his wife said. “Now we can get rid of the dingy brown one over Satus’ mantle. I’ll give him the blond one and the other to Goodwill Industries.”

“Darling,” his wife sighed, “you know how she feels about hunting. Which reminds me—please don’t brag about this one too much, or soon she’ll have her anti-gun committee directed toward your hunting association.”

“I know, I know,” he groaned. Then he smiled, and his eyes brightened as he trotted outside to prepare the man.

The next day Xiron stood in front of the fireplace conversing with his friend, Uzania. Xiron’s ten-point rack threw a wavering shadow on the opposite wall. Their ironically soft deer eyes glinted almost evilly as a log fell and burst momentarily into flame.

“Didn’t suspect a thing. For a minute I thought he’d seen me because he frowned, but I suppose it was something he was thinking because he started smiling again. Got him clean. Killed him instantly.”

“I shot a black-haired man . . .” They sat down with their beers in front of the fireplace. The vacant eyes of a copper-haired man watched as they bragged and recounted other exciting hunting stories.