Which means that we have been almost constantly on the move since 6 a.m. Thursday morning. It began with a 6.9-mile hike–ascending to to the summit of . . . well, that’s a good question . . . it was one of the 16 peaks in Frozen Head State Park, at any rate. It was a nearly four mile ascension via the North Old Mac Trail and nearly three miles back down the mountain via the South Old Mac Trail, climbing from 1,386 feet to the 3,088-feet summit. But, there was still one trail left to do, this one a more leisurely 1.24 miles along Panther Branch and up to Emory Falls, a comparatively easy 375 feet gain in elevation.

Frank’s photo of a red eft on the North Old Mac Trail. 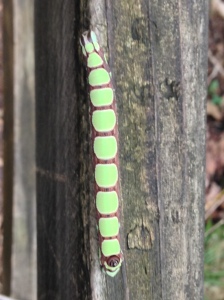 We finished with plenty of time to head to Nashville and find Radnor Lake State Park, which I had somehow missed the last time I was in the area. Crossing in to the Central Time Zone gained us an hour so that when we arrived there was still plenty of time to cobble together a loop hike from their well-maintained trail system and complete that park, as well, rather than returning the following day to hike it. Four miles and another 400 feet gained (and lost) in elevation later, we were ready to hit the road, and begin our journey “nach Hause.”

Frank grabbed this photo of a deer sipping from Lake Radnor.

Radnor Lake State Park made a lovely ending to the June hiking trip.

It didn’t take us long to realize that we were in the midst of Nashville’s rush hour traffic. It took us more than an hour to leave Nashville and its environs; I think the HOV lane went all the way to Murfreesboro. So, we were finally able to stop for the night about an hour northwest of Chattanooga. Six hours of sleep later, we were on the road again, losing an hour when we crossed back into the Eastern Time Zone, but still managing to make it back to Savannah before noon. 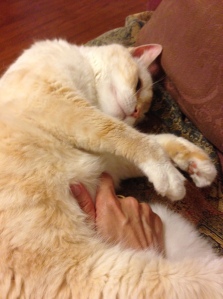 And this guy was very happy to see us return.

Next (and last) hiking trip: July

AKA: What goes up must come down. Okay, it started about 3 a.m. when I woke up because I thought I heard rain. But, it was 3 a.m., so I went back to sleep. Sure enough, when my alarm went off three hours later, it was, indeed, raining. But, we have only five days to hike eight parks, and the large umbrella purchased on the fly at Big Lots was going to have to suffice to keep my notebook dry while taking trail mileage and GPS points and other notes. Oh, and reason I call it the “trail less traveled” is because there were so many spider webs across the trail that Frank had to use the umbrella to fend them off–literally hundreds of spiders landed on the umbrella. Freaky.

A sample of the blackberries that have overtaken the Indian Rock Trail.

So, back to Big Ridge State Park where we would hike the Big Valley Trail up to the Indian Rock Trail Loop on Big Ridge, itself. The climb up Pinnacle Ridge and down to Dark Hollow then up Big Ridge, despite being in the rain, wasn’t that bad and about what we expected. Then we entered hiker hell. The Indian Rock Trail was 2.6 miles of dodging overgrown trail–trail covered with blackberry brambles and poison ivy amongst other plants. And, of course, they were sopping. The rain stopped, but the plants were happy to soak our legs and boots. We descended through this hell all the way to the shores of Lake Norris before climbing back up to Big Ridge and the eponymous Indian Rock–at one point we went straight up hill for a quarter of a mile. And when I say straight up, I mean that it was so steep I was grabbing any hand hold I could find–sapling, rock or even a blade of grass. The bright side was that we had chosen to head left on the loop not right. I cannot imagine that I could have made it down that quarter of a mile without falling and sliding on my backside most of the way. When we reached the top, we faced more overgrown and rocky trail.

A sample of some of the overgrown trail but not the worst, by far. Much of it was hip-height.

When we got back to the parking area more than six miles later, we were definitely worse for the wear–hot, tired, dehydrated. Frank had soaking boots, I had a nasty gash on my shin from crossing a blow down. A good lunch was called for before we started hiking in Norris Dam State Park. Bellies full and rehydrated, we discovered that most of the trails at Norris Dam were either horseback or biking trails. Bizarrely, the hiking trails were only accessible via each other. That meant we had to hike the Lakeside Loop to access the Christmas Fern Loop to reach the Tall Timbers Trail. It made for a convoluted hike, and at one point we had to climb 92 steps up a hillside, but compared to the morning, it was nothing. And only about 2 miles.

One of the so called “tall timbers”.

The next set of trails involved making a figure eight out of the Harmon Loop and Fitness Trails. They also featured more climbing than expected. We found ourselves joking along the fitness trail, sponsored by a local hospital (I am not making this up) because 1) it claimed to be for seniors but was hardly easily accessible, involved some elevation gain, and the bugs were extremely annoying; and 2) the rapidly deteriorating stations along it promised to send more seniors to the hospital than to help them physically. One station, a balance beam, was perched on the edge of steep drop off–guaranteed to send granny tumbling down the hill if she couldn’t maintain her balance. What were they thinking?

Bright spots in the day–two tortoises we saw on the Big Valley trail and two deer on the 3-trail loop, the lake was beautiful, and there were lots of lovely wild flowers and mushrooms. Plus, the sections of trail that weren’t too physically demanding were quite refreshing. All in all, a rewarding but physically demanding day. Tomorrow: Frozen Head.

Tortoise #2–actually the only photo I managed today.

Today may have ended early, but it was an exhausting day of elevation gains and losses on the first two trails followed by a couple of easier trails. We started the day in Panther Creek State Park, early, hiking the Point Lookout Trail. It was only 1.9 miles, but involved a nearly 500 foot elevation gain to the highest point in the park. Unfortunately, the promised stupendous view was blocked by trees–new growth trees which could have clearly been sacrificed for the view.

The trees to the left block the view of the lake. 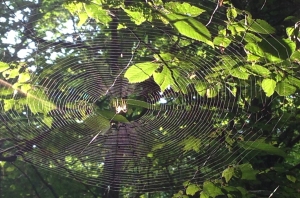 The first person to hike a trail each day gets a lot of these in their face. By Frank.

But, we were treated to a similar view when we started looking for the Ridge Crest Trail–a beautiful panorama of Lake Cherokee. The Ridge Crest Trail, though only 1.4 miles, was .7 miles rollercoastering along the top of a limestone slab promontory bordered by cedars and prickly pear cactus. The last quarter mile was a sharp drop down to the shore of Lake Cherokee. Then straight back up. Beautiful but exhausting.

That left one trail to hike in the park before we could move on to the next. I opted for the moderately easy Road to Recycling Trail–an nice ramble through the woods with very little elevation gain. From Panther Creek, we headed to Big Ridge Park where we discovered that we could either hike along the lakeshore or do some more strenuous climbing up to Big Ridge if I wanted to do a lengthier trail. Tired of hiking along lake shores, I decided to leave the strenuous climb for first thing in the morning, especially since the ubiquitous afternoon thunderheads were building once again. Instead, we hiked the Ghost House Trail because it was relatively easy and had a cool name. The loop trail led to the greatly eroded remains of an old house and then past a cemetery. As we hit, the road back to the parking area, it was beginning to rain. Time to find shelter for the night and begin again tomorrow. 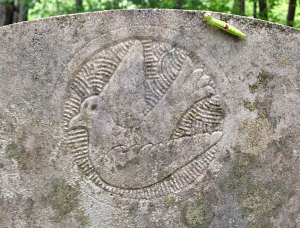 An interesting gravestone along the Ghost House Trail by Frank.

I’m finally doing my penultimate round of hikes. Next month, I will finish them all off. But, today, I managed to complete three parks (because they had a limited number of trails). We started this morning, early (7:44 a.m.), at Booker T. Washington Park just outside of Chattanooga. It was both quiet and relatively cool (72º F) as we started the nearly 4-mile loop.

The next stop was Hiwassee-Ocoee Rivers park, another of Tennessee’s linear parks, created for folks to enjoy rafting and kayaking on these rivers. But, this is a hiking book and the park boasted one trail–Gee Creek Falls Trail–rocky and somewhat difficult, but the reward was a tenth of a mile of beautiful cascades and falls.

I saw a dung beetle on the trail!

We ended the day at Fort Loudon State Park, the site of a British fort during the French-Indian Wars. The Cherokees and Brits got along during the war, but afterwards an unending series of retributions from both sides destroyed both the fort as well as the British who occupied it. Needless to say, a lot of Cherokee and their homes were demolished as well. Truly sad. The Meadow Loop/Lost Shoe Loop trails we hiked were quite lovely until we reached the meadow and realized that thunderstorms were flanking us from both the east and west. It was thundering ominously as I raced across the meadow trying to reach the shelter of the woods, and by the time we were hiking along the shores of Tellico Lake, the winds had whipped up the waves and a downpour seemed imminent.

But, we kept on hiking, resolved to a good soaking, and managed to return to the car, after a 4+ mile hike, dry and thankful. We were barely out of the park before the skies opened up and we were driving in blinding rain. But, we were dry. Lots of elevation gain and loss today, and I am bound to be feeling it tomorrow, but I will gladly sacrifice sore muscles for having avoided being struck by lightning and stuck in a downpour.

Okay, I had to photograph these despite the possible rain.

Well, that’s not completely true. The deadline for the next 30 parks in my book was yesterday, and I managed to get 19 of them sent in before my brain short-circuited and I realized my final proofing was doing more harm than good. Fortunately, my deadline fell on a weekend and the editorial department can’t even start working on them until Monday.

So, I’ll send in 11 more today except that it will actually be 9 because I still have two left to write up from my last round of hiking. But 28 parks are not going to get through editing tomorrow, and I should be able to get the last two in by the end of the day. I hope.

Then, I’ll just have to sandwich the last 16 parks in between a trip to California in early June and our house closing on July 30 or maybe I can talk the publisher into extending the final deadline . . .