First, some pictures from yesterday: 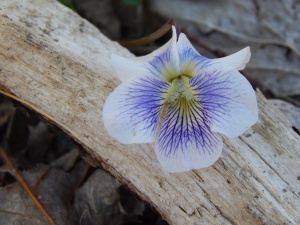 A violet in front of my campsite. 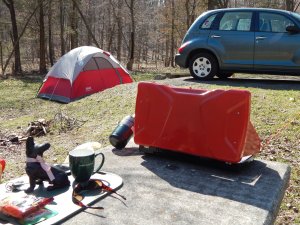 The name was too good to be true. Honestly, everything was fine until I walked out of the bathhouse this morning sometime about sunrise–6:44 am. I was even thinking: Ha! I’ve reached a new low (heehee), I can camp when it’s freezing and do okay. And, then, something big and white and fluffy came drifting down from the sky. My first thought, being a South Georgia Girl, was “Ash! Is the Okefenokee burning again?” And almost immediately thereafter, “you’re in Tennessee. That’s . . .” and as I said, “snow,” suddenly the flakes were everywhere. And not the nice dry kind that bounce off things, but the big, moist flakes that land and melt.

Don’t know if you can see it but there is snow sticking to the tent.

Oh no, I thought, my tent! Sure enough, the flakes were sticking to it. And while I was getting the last of my things out of it, my fingers were rapidly becoming numb. And, lest you think I am a wimp, I suffer from Raynaud’s Phenomenon (don’t ask me why it’s a phenomenon). By the time I was trying to fold the rain fly, my fingers were crossing the line from Raynaud’s and heading down that dark alley toward frostbite. I ended up having to just stuff my tent and tarp into the back of the car before running to the bathhouse in indescribable pain as my fingers were turning a deep purple. The pain was intense (and I have a high tolerance for pain) but I was able to bring the feeling back by running them under cool water; anything hotter hurt.

Feeling human again, I drove to Natchez Trace where the attendant was kind enough to refund my campsite (as it was snowing and supposed to plummet to 23-degrees tonight and she agreed a tent wasn’t a good idea). I did, by the way, hike my trails in 37 degrees and snow. I had problems with my Raynauds on the the first trail (those lake winds) but was fine on the second–a pretty little trail through some former erosion gullies which I forgot the name of because I kept calling it “Fern Gully” to myself.

So, 23 and snowing. Time to head South! Who knew that I would drive for more than an hour in a blizzard between I-40 and I-24? My windshield wipers were so caked with snow they could hardly move. I’m laughing now at the obstacles life loves to throw in our way, but it was harrowing at the time (for someone who hasn’t driven in snow in a number of years; when I lived in Virginia, it wasn’t that big a deal). And then I arrived in Georgia, and guess what? It was snowing even though it was a lot warmer and the sun was shining. Go figure.