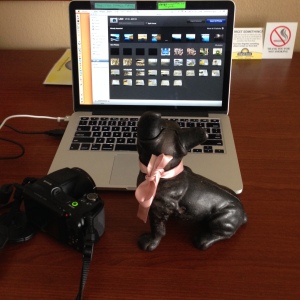 Rémy helps me upload photos from the first three parks.

Turns out yoga and walking just don’t use the muscles you need to climb the hilly ridges and bluffs of the western border of Tennessee. It has been a lot of up and down these past two days and while it has been tiring and made my muscles sore, I know it has been good for me.

Another Verizon-less day yesterday, but of course I have it here, in my hotel in Ripley, Tennessee. One of the reasons I chose not to camp at Fort Pillow today is because they have no electricity at their campsites. And, electricity was crucial this morning at my campsite in Meeman Shelby–I was able to use my space heater to warm up my 39-degree tent so that when I started hiking at 8 a.m.-ish, my fingers were functioning even after taking the tent down! Very happy camper.

As for my first park–T.O. Fuller–hmmm. Just south of Memphis and practically sitting in the center of FedEx Distribution land. FedEx planes, trains, semis, you-name-it–that constant city buzz was ever present. Yet, despite the noise, still quite lovely.

So, third park out of eight, Fort Pillow, is the site of a Confederate massacre. Yes, the South massacred nearly 300 Union soldiers, mostly African American, to their loss of about 14. I was going to do the 5-mile hike until I discovered a significant portion was on a road with relatively heavy traffic (for a park) that included huge dump trucks. So, I just went out to the fort and back for a 3-mile-ish hike.

So, catching up here in Ripley for my last night in a motel before four nights of camping. Downloading photos was crucial because I forgot to do it yesterday. And I wanted to get one last blog in before I head to the next park because who knows if I will have internet access? Well, perhaps,  The Shadow knows . . .

1 thought on “Too Tired to Title”