Above all, trust in the slow work of God.
We are quite naturally impatient in everything
to reach the end without delay.
We should like to skip the intermediate stages.
We are impatient of being on the way to something
unknown, something new.
And yet it is the law of all progress
that it is made by passing through
some stages of instability—
and that it may take a very long time.

And so I think it is with you;
your ideas mature gradually—let them grow,
let them shape themselves, without undue haste.
Don’t try to force them on,
as though you could be today what time
(that is to say, grace and circumstances
acting on your own good will)
will make of you tomorrow.

Only God could say what this new spirit
gradually forming within you will be.
Give Our Lord the benefit of believing
that his hand is leading you,
and accept the anxiety of feeling yourself
in suspense and incomplete. 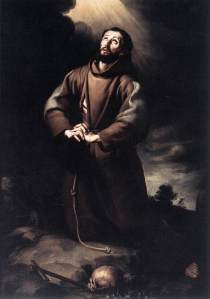 Today marks the fifth anniversary of my profession to the Third Order, Society of Saint Francis. And nearly a decade since I first worked my way from aspirant to postulant to novice before being professed.

As it says in the Principles of the Order: When Saint Francis encouraged the formation of The Third Order he recognized that many are called to serve God in the spirit of Poverty, Chastity, and Obedience in everyday life (rather than in a literal acceptance of these principles as in the vows of the Brothers and Sisters of the First and Second Orders). The Rule of the Third Order is intended to enable duties and conditions of daily living to be carried on in this spirit.

I will end with the Paraphrase of the Lord’s Prayer written by Saint Francis:

Hallowed by your name: May our knowledge of you become ever clearer so that we may realize the breadth of your blessings, the extent of your promises, the height of your majesty and the depth of your judgment.

Your kingdom come: So that you may reign in us by your grace and bring us to your kingdom, where we shall see you clearly, love you perfectly, be happy in your company and enjoy you forever.

Your will be done on earth as in heaven: That way we may love you with our whole heart by always thinking of you; with our whole mind by directing our whole intention toward you and seeking your glory in everything; and with all our strength by spending all our energies and affections of soul and body in the service of your love alone. And may we love our neighbors as ourselves, encouraging them all to love you as best we can, rejoicing at the good fortune of others, just as if it were our own, and sympathizing with their misfortunes, while giving offense to no one.

Give us today our daily bread: Your own beloved Son, our Lord Jesus Christ, to remind us of the love he showed for us and to help us to understand and appreciate it and everything that he did or said or suffered.

And forgive us our sins: In your infinite mercy, and by the power of the passion of your Son, our Lord Jesus Christ, together with the examples of the Blessed Virgin Mary and all the saints.

As we forgive those who sin against us: And if we do not forgive perfectly, make us forgive perfectly, so that we may truly love our enemies for love of you and pray fervently to you for them, returning no one evil for evil, anxious only to serve everybody in you.

Lead us not into temptation: Hidden or obvious, sudden or unforeseen.

But deliver us from evil: Present, past or future.

I have spent the past couple of weeks continuing to muse on the road theme. A multitude of songs came to mind, including the song by The Beatles above. It’s amazing how many love songs can easily be addressed to God, as well. No doubt, that is the reason why Bernard of Clairvaux made the same connection with the Song of Songs. But, the above song seemed more fitting to my thoughts as I see it as yet another version of the wilderness road. In other words, the road to God is never easy.

This year, instead of doing the daily lectionary readings, my husband, Frank, and I decided instead to read the Bible in a year: the entire Bible, not just the sections chosen for us. We are now well into Isaiah with its prevalent imagery of wilderness and paths, and, reflecting back on Biblical history from Genesis through Isaiah, I realized that keeping creation focused on the Almighty had been a full time job for God and his prophets.The number of Asherah poles, alone, that were raised and thrown down is staggering.

Humans are exceedingly difficult to keep focused. This was something of which Jesus was acutely aware when he began his teaching. Thus the Parable of the Sower: the majority of the seed dies in one way or another. Only a quarter of the seed sown falls on good soil. 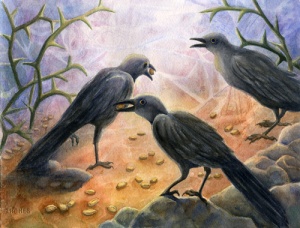 So, are we really surprised that the number of people in the pews has fallen? Has anything really changed? Even post Constantine, it has been a continual battle to keep people focused on God. From the desert monks to Benedict of Nursia to Francis of Assisi to Martin Luther and so on and so forth, those who believe are constantly looking for a way to “rebuild” the church, to call people back to God.

And yet, we continually create churches that push people away from God. We create the impression that the most important things are the number of people filling the pews not to mention asking those who attend to give as much as possible of their money and time.

In the Christendom era, church became a duty, a respectable “social” club. Where did that leave actual conversion? When people were baptized in the early church, it was possible that this act alone could lead to their death in a persecution by the Roman Empire. Baptism in that setting was a serious commitment, a life changing event. Where once people were drawn to Christianity because of how different its followers were, now we go to extremes to try to prove how mainstream we really are.

We attempt to gloss over the harsher things Jesus said in order not to frighten people off. And while I believe in a loving and compassionate God, I also believe Jesus meant it when he said, “The reason I speak to them in parables is that ‘seeing they do not perceive, and hearing they do not listen, nor do they understand.’ With them indeed is fulfilled the prophecy of Isaiah that says:

So, the real questions are, if we want to partner with what God is doing in the world:

The wild and windy night that the rain washed away
Has left a pool of tears crying for the day
Why leave me standing here, let me know the way
Many times I’ve been alone and many times I’ve cried
Anyway you’ll never know the many ways I’ve tried
And still they lead me back to the long and winding road

Serapion the Sindonite traveled once on a pilgrimage to Rome. Here he was told of a celebrated recluse, a woman who lived always in one small room, never going out. Skeptical about her way of life—for he himself was a great wanderer—Serapion called on her and asked, “Why are you sitting here?” To which she replied, “I am not sitting. I am on a journey.”

I’m not sure why that little piece of desert wisdom appeals to me but I believe it is because the word, journey, has always held such strong connotations for me. And, despite the fact that I spent six months backpacking from Georgia to Maine, I can also easily see that a journey can be taken while sitting quietly in one small room.

In the weeks leading up to the 77th General Convention, interest arose among three bloggers for The Episcopal Church to experience an Acts 8 moment. The deacon Stephen is martyred at the end of the seventh chapter of Acts. The eighth chapter is what follows as the Holy Spirit thrusts the church in crisis forward into mission. It’s an in breaking of the Holy Spirit. Those interested in taking time to pray and discern God’s will for the church met a couple of times to toss around some ideas for the types of things that could be done: praying together, Bible studies and dreaming about what the church can be, among other things.

During the second meeting, just before Convention ended, our Bible study centered on Acts 8:26 through the end of the chapter. As Susan Snook began to read, my attention was caught immediately: “Then an angel of the Lord said to Philip, ‘Get up and go toward the south to the road that goes down from Jerusalem to Gaza.’ (This is a wilderness road.)”

Why, I wondered, did Luke find it necessary to point out that Philip was instructed by the angel to travel a wilderness road? My first thought was to compare a wilderness road (or path) to an interstate highway. In the wilderness, one must be constantly alert: the road can be rocky and uneven; snakes, lizards and other wild creatures are often present; there are no clear exit signs to mark where one might need to turn; there are no rest areas with their usual amenities.

Philip, naturally, would have been prepared for this. And perhaps that is why, despite all the obstacles, the early church grew. The Apostles knew they had to be on the lookout for every possible opportunity to spread the Gospel. So, when Philip met an Ethiopian eunuch who happened to be on a spiritual as well as physical journey, and on a wilderness road no less, he gladly accepted the opportunity to share the Gospel.

Have we traded the wilderness road for the interstate highway, breezing by all the “Ethiopian eunuchs” out there just waiting to have scripture explained to them? We’ve grown so accustomed to the way things are done that we’ve lost our way on The Way.

The New Oxford Annotated Bible notes that “get up and go toward the south” could also mean “get up and go at noon.” I am sure it is not a coincidence that in the very next chapter of Acts that Saul, also on a journey, has his first mystical experience with Christ. And like Philip, who opens up the Gospel to someone who, prior to Jesus, would not have been allowed to become a proselyte, Saul brings the Gospel to the gentiles.

It is my belief that in order to renew the church, we must return to the wilderness road. It is time to pull ourselves out of the “that is the way it has always been done” rut we have fallen into and actually begin to look at the road ahead of us.

I don’t have answers at this point, so much as questions: